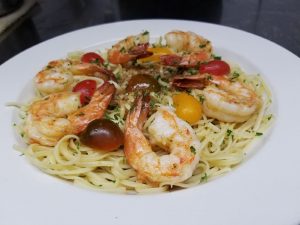 Thank you for choosing Esposito’s Maplewood III to host your special event. This section provides menu options and pricing for packages If you need assistance or have any questions feel free to call us at 856-692-2011 or E-mail: info@maplewood3.com

Prices are subject to 7% sales tax.

Shrimp Wrapped in Bacon
jumbo shrimp stuffed with horseradish and wrapped with bacon then crispy fried.

Crab Balls
prepared with lump crabmeat and our special blend of spices then fried golden brown.

Or any appetizer from the silver or bronze package

Prices are subject to 7% sales tax.

Chicken Piccatta boneless breast seasoned and lightly browned in garlic, mushrooms and olive oil then de-glazed with white wine, lemon and a touch of chile flakes. Served with fresh vegetables and baked potato

Eggplant Parmigiana crispy fried eggplant, topped with mozzarella cheese and basil marinara sauce.
Served with a side of imported linguini

Prime Ribs of Beef a large boneless cut, served as you like, with a side of creamy horseradish sauce.
Served with sauce Au jus and side of stuffed baked potato and sauteed string beans